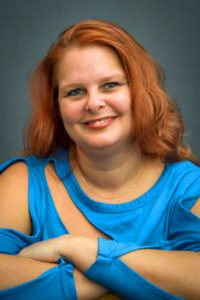 Valarie is Owner/Operator of The Whole Nine Yards.

When it comes to the business of custom design, Valarie is someone you want to know. She offers a fierce determination, out-of-the-box ideas, and a drive towards excellence & high accomplishment.

Valarie is a graduate of Sheridan College, Oakville, Ontario in Fashion Technique and Design, fulfilling her dream of becoming a designer.

In the last 25 years of her professional career she had had a wide variety of experiences.

Combined with various other contracts, she has had a successful business in Toronto for 6 years. As well as being Head Designer & Head Drafter for Finelines Dancewear

Coming back to Thunder Bay was a priority as her desire for her own store continued to grow. She was seeing a need for her type of business in Thunder Bay as the alterations & tailoring companies were starting to retire.